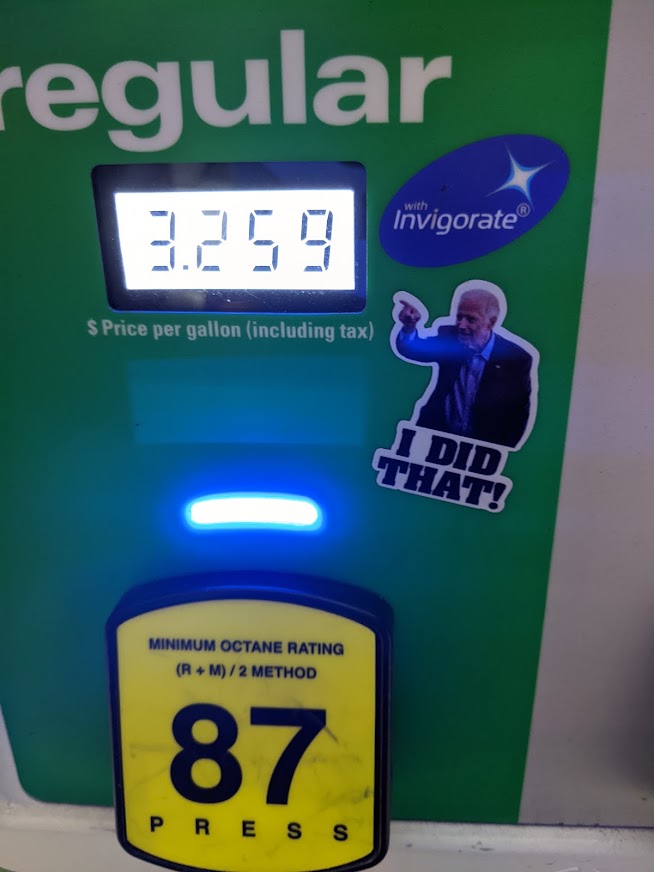 The left really has no idea what exactly is meant by grassroots activism and action. I was reading an opinion piece this morning from the Boston Herald’s Joe Battenfield titled “Biden tormented by Republican guerilla action and ‘I did it’ stickers.” It’s a short piece, but it’s highly illustrative of the monstrously large blind spot the left has for anybody who opposes their policies, and the definition of grassroots action.

I’m going to do a brief fisking of this silly piece here. It’s from November, but it is a good example of poor Democratic understanding of how Americans work. Article statements are bolded and my response to statements are italicized. Let us begin.

If you see Joe Biden’s picture on a gas pump these days, it’s not a tribute to his amazingly successful energy policy.

First off, I have to ask WHAT ‘amazingly successful’ energy policy? The price of gas has increased almost exponentially since Biden was inaugurated. He opened the strategic reserves for 50 million gallons when Americans use 20 million gallons A DAY. That alone is pretty damn clueless. He’s cut off pipelines and stopped fracking, forcing the US back to reliance on foreign oil. He’s asked OPEC to increase production. We were actually energy independent under Trump. Under Biden, we’re back to reliance on foreign oil. How the hell is that successful??

The stickers — with Biden pointing to the $3.50 a gallon gas price and saying “I did that!” — are part of a Republican guerrilla campaign to undermine the Democratic administration. They’ve gone viral online.

And it’s cheap and easy.

A 100-pack of the stickers is going for just six bucks on Amazon.

The assumption here is that the stickers and their appearance is coordinated by the Republican party. LOLOLOLOL!! That’s too funny! Because, yeah, the only reason anybody would oppose Biden and his dementia-addled policies is through a GOP coordinated campaign. Yep. Right. No way in hell could average Americans be capable of ridiculing authority on their own. Nope. Democrats/leftist progressives orchestrate everything on their end, including their “grassroots” efforts and thus they are absolutely incapable of recognizing independent action by any other group. And the complaint that this is simply to ‘undermine the Democratic administration.’ Because of course, THEY’VE NEVER done anything like trying to undermine a Republican administration. Oh, no. Never. Obviously, opposing a Democratic administration is solely the work of Republican guerillas. Because we all know that average Americans are all Democrats who are just brain-washed by those eeeeebil GOP types.

And the clear horror that these stickers are cheap and easily available on Amazon of all places! I mean, really! The horror! Amazon is supposed to be on OUR side! Who let them sell those disgusting stickers??

It is to laugh.

You might see the derisive stickers up in New Hampshire, the swing state Biden is set to visit on Tuesday to promote his $1.2 trillion infrastructure package that just passed Congress.

The Democratic president may not get the overwhelmingly positive reception he was hoping for, though.

New Hampshire is a blue state that’s in danger of going red in the 2022 mid-term election and, like the colorful leaves that fall before winter, it’s often a harbinger of chilly political winds to come.

Biden’s approval rating in the Granite State is the same as it is nationally — abysmal. And the passage of the infrastructure bill won’t change that, no matter how much the Democrats and CNN celebrate it.

Oh, noes! You might see these awful stickers in New Hampshire! Oh, but wait. People in New Hampshire don’t like Biden. And, they just might, horror of horrors, go red in next year’s election. You mean a swing state, which you admitted NH is, might swing? How is that even possible? And Biden ‘might not’ get the reception he’s looking for…first off, I don’t think Biden will even know where he is, and secondly, anybody with half a brain should be able to see (as apparently the good people of New Hampshire have) that this infrastructure bill has zero to do with infrastructure and everything to do with lining the pockets of Democratic party elites and their favored sycophants.

We do have to give credit to Mr. Battenfield here though. At least he admitted that Biden’s poll ratings are, in his words, abysmal. Biden makes Jimmy Carter, cardigans, malaise, soaring gas prices, gas lines, and all look absolutely stellar. And, Mr. Battenfield does admit that CNN is shilling for the Democrats. Of course CNN has become such an obvious mouthpiece for the Democrats that even Democrats are starting to notice.

The gas pump stickers are similar tactics to what Democrats did to Republican presidents like Trump. Remember those “Not my President” bumper stickers? So in a way Republicans now are just returning the favor.

Biden opponents have also adopted the “Let’s Go Brandon” chant to taunt the president. It’s a PG way of saying something much more crude that has the same number of syllables, but it’s a clever tactic and it drives Democrats crazy.

At least you’re admitting that this is simply turnabout. But, please. Trump was not the first Republican president in the cross-hairs of such actions by Democrats. Poisoning the well and mocking a Republican are standard Democratic tactics. To complain because Republicans finally started saying such things out loud is the height of hypocrisy. And again, it’s not a ‘tactic’ as Mr. Battenfield seems to be implying. It’s a response to stupid actions and stupid statements from the Biden administration. Believe it or not Mr. Battenfield, those of us who oppose Biden and his handlers don’t require GOP persuasion (the elites of which are just as stuck in the swamp as Democratic elites) or organization to respond to stupidity. We’re perfectly capable of thinking for ourselves thankyouverymuch.

“Let’s go, Brandon” is the result of a clearly Democratic reporter trying to cover for Biden. If whatshername had just ignored the shouts and kept on with her interview, “let’s go Brandon” would never have become a thing. This is also known as “hoist by your own petard” or “shot yourselves in the collective foot.” And anybody who has siblings can tell you, the more you protest about a name or phrase they invented for you, the louder and longer they are going to use it. And in an annoying sing-song tone to boot. So, we’re gonna use it just because it annoys the crap out of you.

This is what passes for grass roots political strategy these days. The “Let’s Go Brandon” chant and “I Did it” stickers went viral on social media platforms like TikTok.

Dude. IT’S NOT STRATEGY. Nobody planned this. It is truly organic, unlike your “grassroots” efforts (where everybody at a protest has the exact same printed signs). It’s a mocking response to the dementia-addled president YOU elected and the policies that YOU seem to think we need, and the fact that YOU seem to think the rest of us are incapable of thinking for ourselves. Plus, get over yourself with the condescending, disappointed “this is what passes for…” bullshit.

New Hampshire is a hotbed of politics, because of the first in the nation primary. Voters have become accustomed to getting up close to presidents and candidates and aren’t afraid to confront them in person.

That’s why Biden’s visit contains some risk, although he’ll be protected in his trip to Woodstock, far out of major cities like Nashua and Manchester.

Biden is also planning to spend some quality time in the little middle class enclave of Nantucket over the Thanksgiving holiday. Nothing like going to an ultra exclusive vacation island to showcase how the infrastructure bill will help the little people in the middle of an economic crisis.

Air Force One is expected to fly right into Nantucket’s tiny airport, and Secret Service will be crawling all over the island, which I’m sure the locals will appreciate.

Which is it? Middle class enclave or ultra-exclusive vacation island? Those two terms are mutually exclusive. Air Force One landing anywhere with the president aboard is a pain in the ass. Remind me to tell you about the time it took me over two hours to do a half-hour commute home because a presidential candidate landed at Philadelphia airport and Secret Service closed I-95. Philly’s a big town, and we were inconvenienced as well.

Mr. Battenfield is an interesting mix of recognizing the ability of both political sides to mock and annoy, and his own annoyance that the side he doesn’t like can mock and annoy.

Anybody who pays any attention should know by now that Democrats have zero sense of humor. They love love love to poke fun at their opponents, but when it happens to them they get all offended and angry. Turn their own tactics back on them and watch them turn purple and scream, followed by an almost immediate move into violence.

The idea that mocking Biden is part of a “Republican strategy” is laughable, absolutely blind, and arrogant.

So, keep putting up those stickers (I need to get some myself). Keep mocking Biden, Psaki (she REALLY hates getting made fun of, even when she contradicts herself in the same sentence), Kamala Harris (haven’t seen much of her lately, so that’s a bit more difficult), Nancy Pelosi, and all the others. Mock the woke-scolds and Karens.

Mock them all! Point and laugh at them! We are the younger sisters and brothers laughing at the know-it-all, stuffy arrogance of our older brothers and sisters. Do your best Nelson of Simpson’s fame laugh. HA-HA!

We are descended both genetically and politically from those colonists who took the mocking and derisive “Yankee Doodle Dandy” from British troops and claimed it as our own, proudly singing it whenever and wherever we could.