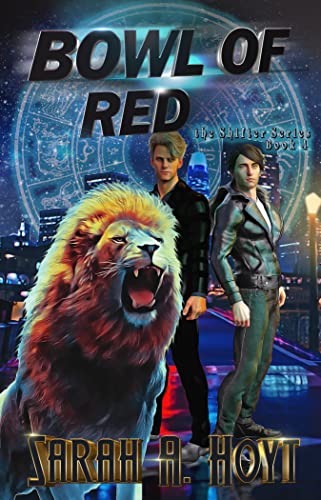 Bowl of Red is the fourth book in Sarah A. Hoyt’s shifter series. Kyrie Smith and Tom Ormson are about to be parents and about to get married. Since Tom is worried that the new fryer will explode if it’s not monitored constantly, they’re getting married in The George, the diner they own, and their friends and employees are giving them a twelve-hour honeymoon break.

But as seems to be the norm for Tom and Kyrie, nothing goes as planned. The Great Sky Dragon and his entourage show up uninvited to the wedding and take over. Immediately following the wedding Kyrie disappears, Rafiel Trall is having strange, painful dreams, and an ancient lion shifter is found dead in the parking lot.

At the top of a tall mountain, there lives a dragon. And the dragon is the master of all animals.

Okay, let’s rewind that. Tom Ormson is a dragon shifter, the scion of a line that was created to rule both Chinese and Norse dragons. But he doesn’t want the job. He co-owns a diner with his wife, Kyrie, who is about to deliver their first child.
In fact, they just got married, when the entire shifter-world, which centers on their diner goes insane.

You see, it is a time of Ragnarök, which means all of the shifter clans are in turmoil, with changing leadership. And the lion clan, to which Kyrie belongs has just lost its leader. Poor Rafiel, too, is tormented by very strange dreams and premonitions. Also, the Queen of the Norse dragons has woken, and wants a word with the Great Sky Dragon.
Hold on to your hats. A wild ride is about to begin, with Tom, Kyrie and their friends at the center of it.

When it ends, the world will never be the same again.

In this long-awaited fourth book, Sarah Hoyt once again takes readers into the world of shifters in the fictional town of Goldport, Colorado. The shifter world in Goldport is detailed, colorful, and well thought out. The sense of community found by shifters and non-shifters at The George comes through the pages loud and clear.

The shifters in Goldport generally just want to be left alone to lead their lives and hang out with their friends, but they seem to be a magnet for all kinds of shifter politics, much to their annoyance.

Ragnarök for shifters is a time of changes. Big changes. Leaders of the different clans of shifters either fight off, or succumb to, challenges to their leadership. In some cases the turnover is voluntary, in others, it is not. Tom, Kyrie, and Rafiel are thrown into a richly crafted world of shifters more ancient than they ever imagined with politics more vicious than they ever imagined.

Not only are the Goldport shifters fully realized and authentic, but the new characters are as well. The responses of ancient shifters to Tom and Kyrie’s actions is violent and at times bemused, while absolutely consistent with what one would expect of some thousand year old being who has avoided humans for all that time, suddenly thrust into the twenty-first century.

There are several interwoven and simultaneous stories in “Bowl of Red”, but it never gets confusing, and the connections between all the stories and motivations of the characters are clear. The reader is never left with the sense that things are thrown in just to inject some action into the story.

I first ran across Draw One in the Dark, the first book in this series, several years ago and was hooked. When Bowl of Red first came out, I speed read it so I could find out what happened. Then I went back and read it again to get all the details. I’ve always loved the idea of shifters (I was a fan of the very short-lived TV series “Manimal” way back when), and Hoyt’s characters pulled me into their stories. These books do need to be read in order, so that you fully understand the story arc, but they are well worth the read.

If you haven’t read this series, I highly recommend it. If you want to talk some more, you can find me in a corner booth down at The George.