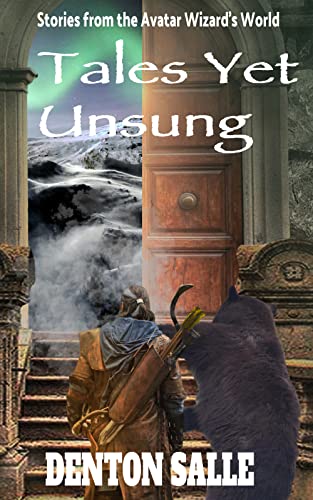 Tales Yet Unsung is a collection of short stories and almost novella length stories that provide history or backstory and fill in some gaps in Denton Salle’s Avatar Wizard series. Some of the stories take place before the first book in the series, Sworn to the Light. In Tales Yet Unsung, we are gifted with ten stories. Two take place before Book 1, one tells us what happened in Book 3 while Jeremy and his friends were in Krali Marko’s black mountain, one takes place immediately after the events in Book 4, and the remaining six are set after Book 5… which has yet to be published.

All of the stories can be read without spoilers for any of the books in the series. We also are provided with more details on the rich world of Slavic myths and legends the provides the basis for the Avatar Wizard series. Additionally, the two stories that precede Book 1 do not leave you wishing you’d known those stories before reading Book 1. And that’s a rare accomplishment. All the stories in Tales Yet Unsung are complete in themselves and do not require any information from the series.

The first two stories, “The Weight of the Past” and “A Boon for a Vixen” provide us with more details on the background of Jeremy’s father, Petrov, and Mistress Arianna. We learn about the precipitating event that drove Petrov to renounce the ways of the volkhvy and the battle he faced after that, trying to put his past behind him and become a good husband and innkeeper. In the second story we get the accurate account of how and why Mistress Arianna came to the keep and how she convinced Master Anthony to marry her. This story is far more accurate than that told by the bards, believe me.

“Lessons in the School of War” takes us into Krali Marko’s mountain with Jeremy and his six companions. We are given a glimpse of what they endured and conquered, how much they grew, and the deep friendships forged in the seven days (fourteen months for them) they were gone.

“Changes” gives us a brief glimpse of the very happy occasions that come, every once in a while, for those who live in the keep. Taking place after the events in the city of Venetsiya detailed in Book 4, we head back to Volkheim keep with Jeremy, Galena, Ivana, Kirill, and Yaros. They bring with them Helena, the Doge’s granddaughter so she may be trained as a volkva, the first heron-shifter to show the gift in many generations. The group arrives home to several other joyful changes and happy surprises.

Finally, the last six stories all take place after Book 5, Hall of Eternal Music (due out Fall 2022). In “Riding with the Storm” Jeremy repays a promise to the spirit of Winter and rides with the Hunt. The temptations to do so eternally are great. Will Jeremy find it in himself to overcome them? In “Winter Megrims” Jeremy and Galena return to his family’s inn so Jeremy can introduce Galena to his parents and younger siblings. Always a bit stressful for anybody. “A Wedding Present for Vasilia” follows up on the story of the bard that got tossed out of the keep for insulting Mistress Arianna and a new song makes its debut at Vasilia’s wedding.

“At the Forge of the Sun” tells Harald’s story and the forging of his new and named war hammer. “Herons and Puppies” was previously published in Adventure Stories for Young Readers and gives us a look at life in the keep from the view of a young girl who is finding out that the volkhvy and volkva are not the monsters she heard about in the stories of her childhood. Helena also learns that chasing a Grim can have some less-than-fun consequences. Finally in “Danil and the Nightingale” we follow Danil as he and Harald ride back to Danil’s land to see if they can figure out what’s going on. The land is crying in pain and sorrow and things at the family keep are not what they seem. Danil and Harald have to face the Nightingale, a monstrous creation of the Dark thought to have been destroyed in the great war.

All of these stories have the same rich descriptions of land and people that characterize Salle’s other books in this series. Salle was raised on these stories, and it shows in how skillfully he weaves his characters and their lives into the folktales. I have read all four of the books published so far, and I can say with certainty that you do not need to read those in order to enjoy the ten stories in this book. I highly recommend you go get and download Tales Yet Unsung and start reading. After that, if this is your first introduction to the world of the Avatar Wizard, I recommend you head back to Amazon and start in on the series. You won’t regret it.

If you’ve already read the four books in the series, you’ll end up like me – happy to be back in the world of the volkhvy and eagerly awaiting more stories.