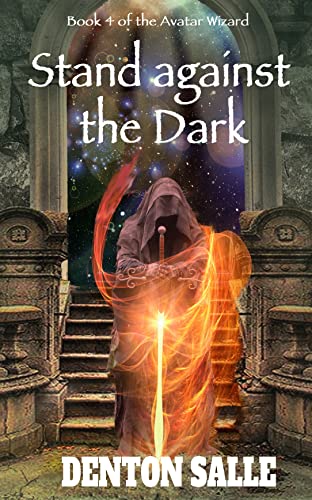 Stand Against the Dark is the fourth book in Denton Salle’s Avatar Wizard series where the myths and magic of Eastern Europe come to life. Jeremy, the panda-shifting volkh wizard has passed his Third Level tests and is becoming more powerful. He is powerful enough to attempt the ritual to call the Lord of Winds and Winter to ask a favor – a ritual that others have died attempting.

Master Anthony has reason to believe that a plague outbreak in the port city of the heron shifters is the work of necromancers and the return of the Dark. Jeremy’s love, Galena has been there with other healers attempting to solve the mystery of the plague and save those who fall to it, without any luck. Under the guise of sending more supplies to the healers, Master Anthony sends Jeremy and his friend Bolgor, another healer, to uncover the source of the plague.

The port city of Venetsiya is filled with politics and power struggles all underlaid with a sheen of Dark magic and the deceptive manipulations of necromancers. Jeremy gets a taste of the fear and hatred others have for the volkh. Yet Jeremy and his companions must find and stop the necromancers behind the plague before this key city falls to the forces of the Dark, with or without the resident’s help.

In the Avatar Wizard series, Salle brings to life the legends and myths that stalk Eastern Europe and parts of Texas to this day. His descriptions bring the keep of the volkh, the cities, and other locations to life and do so within the context of the action of the story without resorting to long descriptions. You experiences the sights and sounds of the city as Jeremy explores the market square and discovers the Sheban merchants.

In Stand Against the Dark, the political machinations at the superficial level (a plot to take over rule of the city) combined with the more manipulative and nefarious plans of the agents of the Dark work together to create a rich context and connection with the previous books. The entire tapestry of work is starting to come together, and readers are getting glimpse of what lies ahead for Jeremy and the other volkh.

I powered through this fourth book in less than a day (yes, I did read it non-stop) and now I’m going to go back and start at the beginning of the series and read all the way through. Then I will eagerly await book number five.

If you are not familiar with the myths of Eastern Europe, do yourself a favor and start with Sworn to the Light, book one of the Avatar Wizard series, and go from there. If you are familiar with those stories, you will truly enjoy Salle’s use of them to bring the world of the Avatar Wizard to life. I promise you won’t be disappointed. Watching Jeremy and his panda avatar grow and mature into a powerful, yet still human, wizard is a lot of fun and a great adventure.