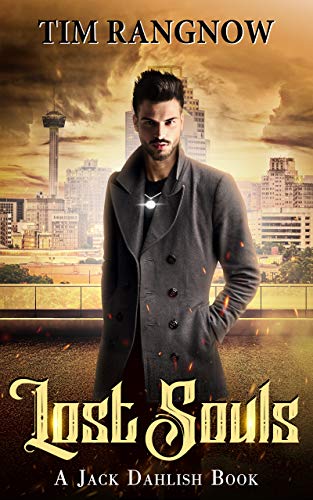 Jack Dalish is a private investigator in San Antonio, Texas. His cases include the usual cheating spouses, or someone trying to find hidden or embezzled funds; cases that are not exciting or exotic but pay the bills. Jack is also one of the few humans who knows that monsters are real and are living among us, disguised as humans. He has a talisman that allows him to sense when one of the Filii Nox is, or has been, nearby. Because of that, his cases include those with supernatural victims and perpetrators.

This first book in Rangnow’s Jack Dalish series opens with Jack’s quiet breakfast interrupted by a distraught grandmother seeking his help with the case of her missing granddaughter. The police appear to have reached a dead end and she’s been sent to Jack by his friend Sergeant Oliver “Ollie” Williams, who has reason to believe that this case is one that only Jack can solve. Since the death of his sister and his acquisition of the talisman he wears around his neck, Jack has devoted the majority of his time and efforts to helping humans and Nox solve crimes involving Nox while keeping the existence of the Filii Nox hidden from humans.

After talking with Ollie, Jack dives into the case of the missing granddaughter. In the course of his investigations he meets a reporter who tells him there are several other unsolved cases of missing little girls. Are they all connected, and what exactly is the Nox creature whose essence he keeps picking up at the abduction sites? The further Jack gets in this case, he finds more questions than answers. The tension builds nicely as Jack races to save the kidnapped children before it’s too late.

Rangnow creates a San Antonio that has a sizeable Nox population blending in with the regular human population. There’s even a bar on the Riverwalk (similar to a certain bar in Chicago) where Nox can get together without fear of exposure. Jack Dalish is a well-rounded character with admitted flaws and room for growth. The secondary characters, especially Ollie, are complete as well. The only one who felt a little flat was the reporter. Her attraction to Jack was so fast that I became suspicious of her motives. But then, that may have been the intention.

The world-building is thorough, the world is consistent, and it’s done without huge info-dumps breaking up the story. We learn how the Filii Nox came into existence through a conversation with the reporter and that Jack’s use of his talisman also comes with a cost, which is nice for the reader. Jack isn’t some superhero with a super-charged Deus ex Machina trinket that solves all problems with no after-effects for the user. There were also a couple of nerd/geek cultural touchstones that were fun to run across; kind of like finding an Easter egg in a game.

Lost Souls is a good, fast read and is available through Kindle Unlimited and as a paperback. It’s the first of seven books in the Jack Dalish series and I plan on working my way through the rest of them. Rangnow has an extensive catalog that is worth checking out as well.