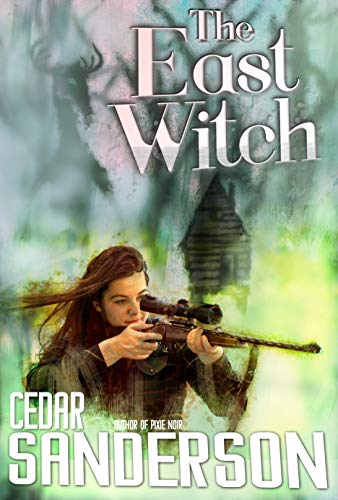 Starting this week, I’m adding a weekly (maybe every two weeks) book review to the blog. I think I’m going to keep it on Tuesdays, but that will be determined by how other things get scheduled. The writing prompt responses for More Odds Than Ends are due (sorta) Tuesday evening, and I usually procrastinate enough that I don’t get them done until then. I expect that the majority of books I review will be in the sci-fi/fantasy genre, but giving that I am a politics and history geek, there may be some of those as well. All of my reviews are in the mode of “hey, I found this fun/interesting/enthralling and you might too.” So, if you agree or disagree, you can comment accordingly. Just keep it polite, thanks. We’ll see how this all goes.

The East Witch by Cedar Sanderson

A bush guide in Alaska finds a wood elf in a bear trap and her day just gets stranger from there. Finding herself Underhill, in the realm of magic and faeries, Anna must draw on all her skills, strength, memories, and sheer determination to get back to her dog and her home. It turns out that helping Ivan, the wood elf, get back home, has trapped her in Underhill. Her efforts to get home and back to her dog (who’s been left alone in Alaska) bring her in contact with individuals and beings she had thought were confined to children’s stories, and the stories that were meant as dire warnings no less. Ivan pledges himself to Anna and vows to do what he can to help her return home. Together they set out to tackle Underhill’s obstacles.

In this stand-alone book, Cedar Sanderson takes her readers back to Underhill and the world of her Pixie Noir series. Her characters are well thought-out and come to life with bright colors and human flaws (even the non-humans have human weaknesses and strengths). This is not your basic “fight the evil in the land so that all may live happily ever after” story. There are nice and not-so-nice and in-between characters (in other words, real), and there are fae politics, and complications arising from those politics. There’s even a bit of romantic interest.

Anna must mind her manners while remembering the pitfalls described in the fairy tales she read as a child. How does one safely leave Baba Yaga’s chicken-legged house? Anna’s resourcefulness and skill as a hunting guide in the Alaskan wilderness are also keys to her survival in the world of Underhill. That resourcefulness and determination win her allies and friends in unexpected places.

Ivan is determined to repay Anna for rescuing him and to prove to his family and clan that he is an adult and capable of handling that responsibility. He gave her his oath and he will prove that it was not an empty or frivolous promise. His adventures, as he searches for Anna, test his resolve and courage. What can one young wood elf do against the tide of fae politics?

Since politics is my bailiwick, I enjoyed seeing the story play out over a layer of politics and plotting occurring in Underhill that also affect Anna and Ivan’s abilities to help each other. Anna and Ivan must use all their wits and everything at their disposal to safely negotiate the rules of Underhill and the all-too-familiar political machinations of those, human and fae, who control competing poles of power.

Sanderson has woven Siberian fairy tales together with what might be called “traditional” fairy tales into a story that makes you want to keep reading. A good book is one that makes you sad that it ended…and The East Witch does just that. I’ve read this one a few times already and I know I’ll be going back again. I can also strongly recommend that if you haven’t done so already, pick up the Pixie Noir series.

You can also read more of Sanderson’s writing over at Cedar Writes where you can find more stories, snippets, and serials, alongside recipes and recommendations of what to read while you’re eating some of those recipes.