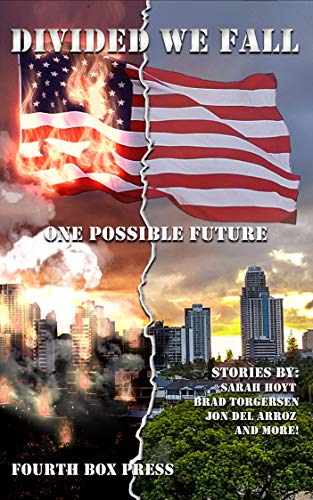 I’ve always liked anthologies because I can get a taste of multiple authors at one time. Anthologies also introduce me to authors I haven’t yet read and finding new authors is always fun. This week’s book review subject is Divided We Fall: One Possible Future edited by Tiffany Reynolds and Patty McIntosh-Mize. The authors include Sarah A. Hoyt, Brad Torgerson, Mack Henkel, Jon Del Arroz, and more. There are twelve stories in all. All twelve are good to great, but I’m only going to go into detail about a few of them here.

The premise of the anthology is the current upheaval following the 2020 election and the fraud that accompanied that election. (If you don’t believe me that the fraud was in place, I highly recommend you go read the Time magazine (https://time.com/5936036/secret-2020-election-campaign/) piece which shows how the election outcome was controlled. Of course they believe it was for the better…I’d argue that controlling an election outcome, no matter your intentions, is in fact fraud. But then, I’m picky that way.) These are not “happily ever after stories” although many of them do end on a hopeful note.

Here’s the blurb for the book:

Political upheavals can be a very dangerous time, especially when ideologies are as far apart as they are now. Divided we Fall presents one possible future, one where powerful forces act behind the scenes to effect the change they’ve wished to create for decades, and have largely been held back. What happens when a nation is sharply divided, anarchistic forces allowed to run wild, and the police are held at bay or even defunded? Add in a presidential assassination, and you have all the potential for a world changing situation. In this world, Divided we Fall.

A collection of talented veteran bestselling authors and several new ones join together to paint a picture of the post 2020 election that none of us hope to see come about. But the more we watch events unfold, the more anything seems possible.

The first story in the collection sets the scene for the reader and provides the context within which the other stories take place. In “Fourth Estate” Mack Henkel gives us the story of the run-up to the November 2020 election, the immediate aftermath of the inauguration of Joe Biden and the consequences for President Trump from the point of view of a reporter who was there, but is writing several years from now. He tells the story of growing up in a strong union and Democratic household. We follow his growing career and doubts until the November 2020 election and aftermath. Along the way we also get a short history lesson about highly contested elections and the role of the Electoral College in American politics. The story is written in the style of a Bob Woodward “tell-all” political book with the insider’s view of events contrasted with the public view. I came away from this story thinking, “it’s plausible, really plausible, and I really don’t like it.” A good story makes you come blinking back into your own world wondering what just happened and that’s what I did with this one.

Brad Torgerson takes on the political attacks against churches in “Secret Combinations”. Torgerson explores one man’s reactions to federal actions shutting down churches, specifically, Latter Day Saints or Mormons, and declaring a faith outlawed. Obviously, a huge move in contradiction to the First Amendment. The protagonist, Ephraim Roberts, a veteran and former federal law enforcement officer is faced with the dilemma of helping LDS members who are trying to make it clear that they don’t want a violent end to the situation or working as an informant for his former employers who are convinced that the LDS group wants to start a shooting war. The frustration Ephraim feels at what he views as the overly optimistic outlook of the LDS members, and the deliberately obtuse view of the feds comes through loud and clear. The decision facing Ephraim is a damned if you do, damned if you don’t situation.

Stories by William Dietrich, “Dangerous Words”, and Leigh Smith, “Delenda Est”, give the reader a father and son facing the same problem. In “Dangerous Words” the son, Bruce McAlister, is a Marine sergeant watching fellow Marines get hauled away for saying the wrong thing to the wrong people. He’s trying to figure out when and where they will be deployed…within the US. He’s also writing a now-illegal blog about the political situation. If anybody finds out about the blog, not only will Bruce be dishonorably discharged, but he will also wind up in jail. Bruce discovers his estranged father’s secret and reaches out in the hopes that the retired Marine lieutenant colonel will be able to give him some fatherly and Marine-worthy advice regarding his options. Bruce gets far more than he expected.

The other side of Bruce McAlister’s story is “Delenda Est”; the story of Bruce’s estranged father, Lt. Col. (ret) Ash McAlister, who is facing his own dilemma. He’s been recalled out of retirement. Like father, like son, Ash is torn between calling out current abuses and upholding his oath. He also has a young family to protect. Finding himself trapped between conflicting courses of action, Ash is equally surprised to reconnect with his son from his first marriage. That reconnection gives him a renewed sense of purpose and another ally in his fight against the unconstitutional actions of the federal government.

Both stories combine the sense of personal loss and renewal in the father-son relationship with the loss and renewal of purpose and country. Both stories ended on a note, even if small, of optimism and made me remember that there are people out there who will do the right thing in the face of huge obstacles.

Sarah A. Hoyt gives us the story of the origins of the USAians in “Teach the Children.” Driven from their homes, a group of unlikely neighbors begin the process of insuring that the children in their care know and understand the founding documents and values of the U.S. The new-found (or perhaps renewed) determination and strength the characters find is why I found hope in the conclusion. As with the father and son Marines, this story is a reminder that there are lots of people out there who will continue to do the right thing in the face of overwhelming odds.

One story that stood out for me, because it didn’t seem to fit in with the others in the sense of people fighting to preserve values and freedoms, was “The Ballad of Becky and Karen” by Jon Del Arroz. Granted, it was a story about those on the “other side” of the equation. Becky and Karen are two high school/college-age young women who decide to show support for the oppressed minorities in Oakland. As a former college professor I do understand the dangers of indoctrination within our educational system. But I still thought that Becky’s refusal or inability to understand the reality of her situation was a stretch. I’ve known and worked with some clueless college students, but never any who were that bad. This piece was an odd note among the other stories in the collection.

In the end these stories are tales of hope, faith, courage, and determination in the face of what may seem like crushing opposition. Like I said above, these are not happily-ever-after stories, rather they are stories of Americans, humans, who will fight for their freedoms and liberties. While I was uncomfortable with the plausibility of the situations described in some of the stories, I was also reminded of the resilience and strength of the majority of Americans. This is a great collection of stories for these uncertain times.