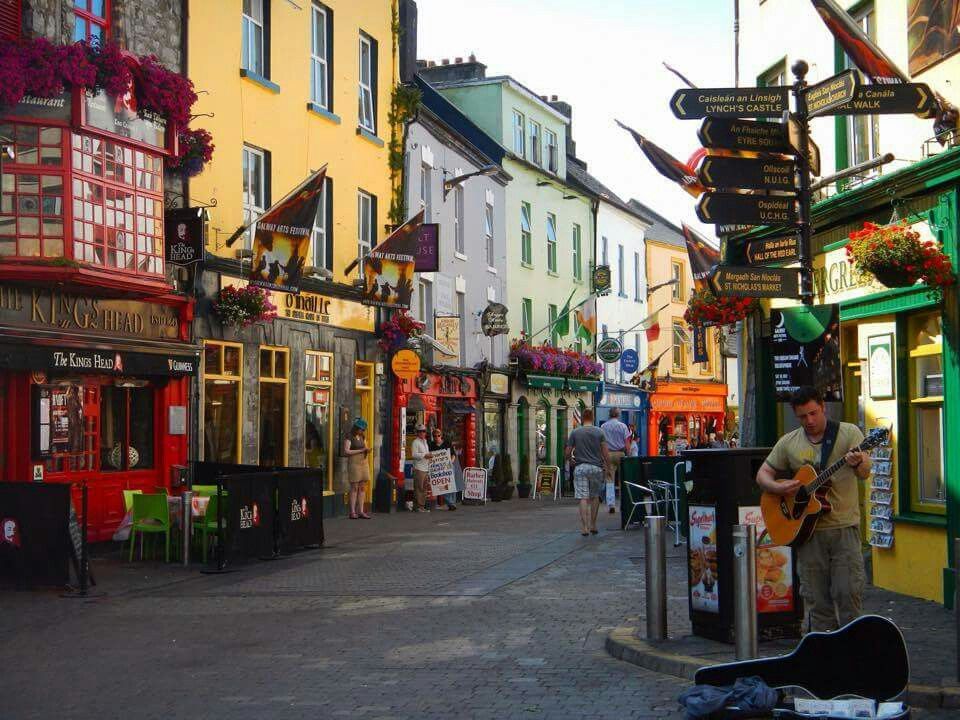 This week’s prompt challenge came from Leigh Kimmel. Leigh’s prompts always make me think. This time, I figured out a way to return to my world of Academic Magic. I think this may be a part of Book #3, or it may be part of a short story. Not sure yet. The prompt was: While visiting a distant city, you make a wrong turn and discover a store or restaurant you remember fondly from childhood. Although you know the company went out of business years ago, the lights are on and there are people inside, just like you remember… As I started thinking about it, the picture in my head became Shop Street in Galway, Ireland. I’ve spent a lot of time there. Yes, it’s a touristy area now, but there is a charm to it that I just love.

Zoe loved wandering around the center of Galway City. This was the last day she would be able to do this by herself and indulge her whims, poking into the used bookstore just off Shop Street, indulging in a pint at King’s Head pub, watching the swans at the Spanish Arch. Despite the touristy nature of the area, it all entranced her and soothed her soul. But the students arrived tomorrow and then the real work started.

When George Wardmaster first suggested that she teach a compressed three week summer course in Ireland in exchange for full university support for her research for the other three weeks, she’d thought that sounded like a great idea. Now, with the student’s arrival imminent, she was having second thoughts. It felt like an intrusion.

Oh, well. She would enjoy the city while she could. Kieran was going to meet her in an hour or so and they would have one last date night at King’s Head. She strolled down Shop Street enjoying the flow of tourists and locals and the competing but not clashing strains of music from the various buskers who staked out spots along the street.

Zoe decided to stop in early at the Kings Head and have a pint and do some people watching by herself. As she moseyed down Shop Street she gave in to a whim and turned down a little alleyway just before the pub. Walking down the alley she felt a shift. She paused and glanced around but nothing seemed off. Shrugging and putting it down to stress, Zoe kept walking. She thought that over the last few days she had explored every alleyway off of Shop Street, but this one didn’t look familiar.

The alleyway made a turn to the right and Zoe stopped in her tracks. Ahead of her, light pouring happily out of the open door, was a place she knew well. The sounds of laughter and conversations drifted down the alleyway. The Seaside Diner. Growing up, every summer she and her mom had gone down the shore for two weeks. The Seaside Diner was their favorite place for dinner. But that was impossible. Not only was the diner located in the New Jersey shore, but it had closed over ten years ago.

Zoe blinked and shook her head, but the diner remained where it impossibly was. She switched over to her magesight. The building was covered in a web of red lines, like a cage. Zoe started moving back slowly, one step at a time. She didn’t turn her back on the diner until she had gone back around the curve of the alley. Then she turned and ran.

Bolting back onto Shop Street, Zoe squeaked as she barely avoided colliding into a pedestrian.

“Whoa! Zoe! Are you okay?” Strong hands grabbed her arms and stopped her from careening further into the street.

“Wha?? Kieran! Oh, thank God!” Zoe gasped. “I…I…it’s…weird…um…” she waved a hand back toward the alley and managed to slow her breathing to a more normal rate. She hugged him desperately.

“What happened? Where did you come from?” Kieran demanded, wrapping his arms around her.

Zoe stared around. The alleyway was gone. She looked back up at Kieran.

“Pub. Beer. I’ll tell you there. Not here.” She dragged him into the King’s Head.

Come on by More Odds Than Ends and pick up a prompt! If you don’t want to deal with a weekly challenge, there are always a few spares hanging around. It’s all good fun!