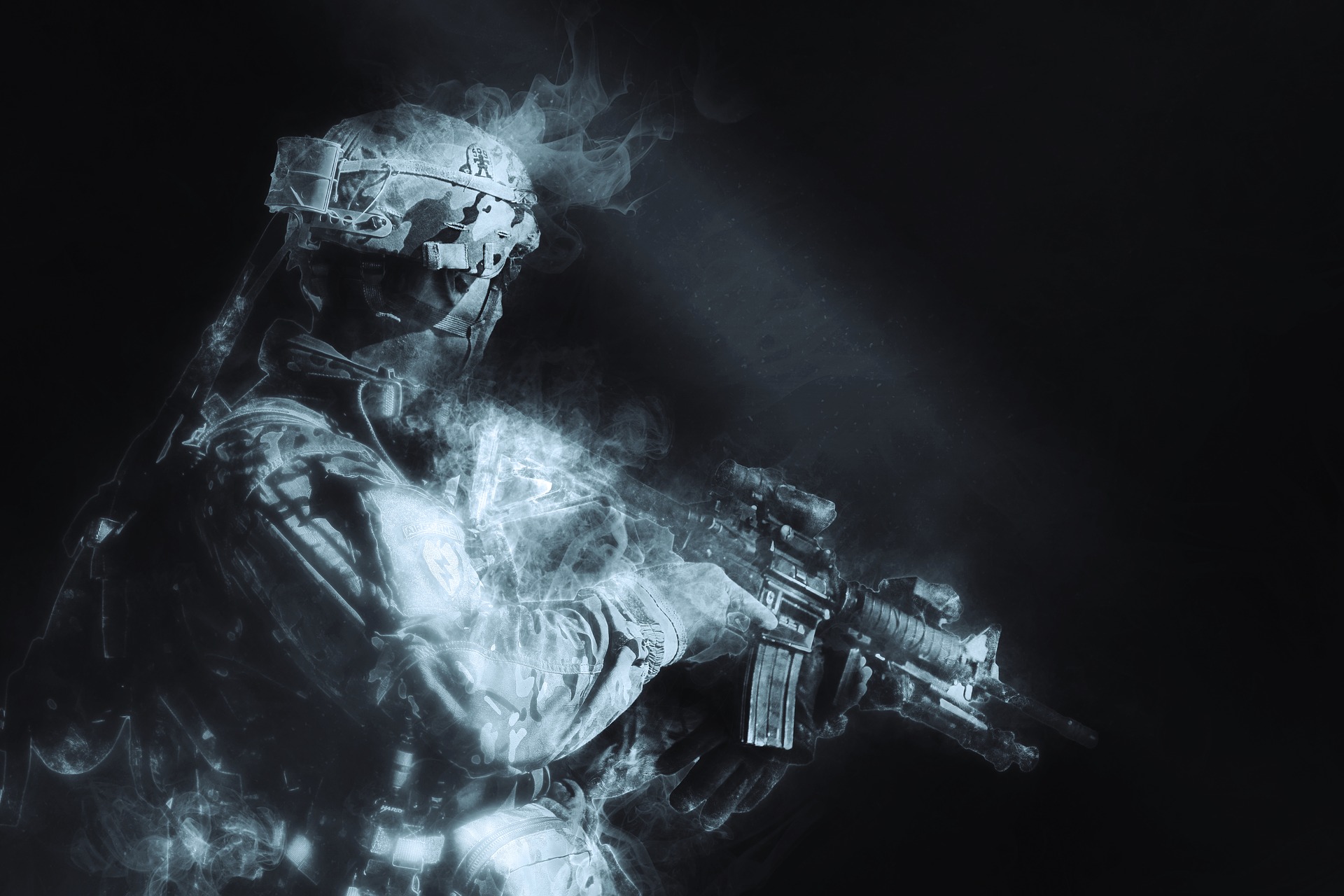 In Defense of All We Hold Dear

I stared across the river hoping to get a glimpse of something, anything through the trees on the other side. I felt a slight movement behind me. I didn’t turn around, figuring it was Barker or one of the others.

Without turning, I grabbed the binoculars Barker handed to me and returned to staring into the trees.

A voice I knew very well but hadn’t heard in years came from behind me. “Well, Miss, I think you have a good position here. What can you see across the river?”

I spun around and stared at my father as he stood just behind and to my right. I could see through him to the trees behind him.

My father had died ten years ago. Before we were invaded again by Great Britain, before I’d ended up running guns to rebels and then become a rebel myself. It was not possible that he was here.

“We’re here to help you,” he said and gestured behind him. I followed the gesture and saw rank upon rank of men and some women standing behind him. They were filmy and unsubstantial. There were thousands of them. I finally found the word…they were ghosts.

“What do you mean help? How? And, how did you get here? You’re all ghosts!” I knew I was not fully coherent. My mind was scrambling to take it all in.

“Yes, I know. But we all served this country in life and many of us died while serving. When it’s attacked, we will come to the aid of those defending her.” Dad was acting like it was the most common thing in the world to be talking with his daughter ten years after he had died.

Barker was standing beside me his jaw hanging open. Others in the group were shuffling away from the ranks of ghostly former soldiers and moving closer together. I looked around and back across the river and took a deep, steadying breath. I turned back to the ghost of my father. I took another deep breath.

“OK, Dad. Here’s what I got. We’re trying a repeat of George Washington’s tactic. We’re going to try to get across the river, surprise the Brits, and blow up their munitions dump and supply depot. Ideally, we’d like to get stuff from both before blowing them up since we’re low on just about everything, but if necessary, we’ll just blow it all up.”

Feeling like I should introduce him, I turned to my small group.

“Guys, this is my dad, the late Major Michaelson. Dad, this is Scott Barker, my second in command, and the rest of the group.” I waved my hand at the others. Some were still staring in shock, others looked fearful, and a few were grinning. In one fell swoop, we had grown from a group of 100 or so to several thousand. Of course, I wasn’t really sure how much help the ghosts could provide. We didn’t have enough weapons for them…could they even hold weapons?

Dad nodded at Barker. “It’s nice to meet you. I will leave it to the others to introduce themselves as needed. I don’t even know them all, there are so many of them. They asked me to be the leader this time once I realized my own daughter was here.”

Barker nodded back and seemed to regain control of himself.

“Nice to meet you too, sir. I do have one question, though. How exactly will you be able to help us? Besides scaring the hell out of the Brits I mean? No offense.”

Dad smiled. “I wondered about that myself at first. We have a special dispensation for this fight as it’s in defense of our country. Our weapons are capable of inflicting harm and even death. And, unlike the living, we cannot be harmed by your weapons.”

I turned and scrutinized the ranks and ranks of ghostly former soldiers. Each one was armed with the weapons of his or her last war. Muskets for soldiers of the American Revolution, M-1 carbines and Thompson sub-machine guns for WWII soldiers, M-16s for Vietnam, and so on. It was a formidable mob of soldiers and weaponry.

Barker and I exchanged looks. Not only had we increased the size of our force almost 100-fold, but it was now mostly indestructible.

My father watched this exchange and smiled. “May I suggest a few additions to your plan?”

“Yes, sir. Please do,” Barker said at the same time.

As we reworked our plan of attack, I kept staring at my father. What I really wanted to do was lose myself in his signature bear hug. Those bear hugs were a staple of my childhood. They had comforted me when I fell off my bike, or out of a tree, or any of the other injuries, both physical and emotional, that happened throughout life. His death had been a huge shock and had left a gaping hole in my life. In many ways, I was grateful for this war. It allowed me to forget about the shambles my life had become, and I had thrown myself into running guns and then commanding rebels. I wasn’t trying to get myself killed, I wasn’t that far gone, but I had been trying to find as many things as possible to occupy my mind.

In a very short time, we had figured out a new strategy. If all went well, we would not only destroy the British force camped out in Trenton on the other side of the river, but we would also take control of the supply and munitions dumps without having to destroy them. Just as with George Washington 300 years ago, this sneak attack could turn the tide of the war. This time, they wouldn’t be coming back in 20 years and taking over again like they had in the War of 1812. We could finally end this on-again, off-again guerilla war. It was a win-win scenario. Well, win-win for us. Lose-lose for the Brits.

The rest of my group had gradually overcome their initial fear of the ghosts. Many of them were even wandering through the other-worldly ranks looking for friends and family members long gone.

“Dad, where did everybody come from? There are way more people here then are buried in the cemetery.”

He smiled at me. “Well, Miss…,” he had called me “Miss” since I was a little girl. It was his, and only his, nickname for me. I had punched any kid who tried to use it or make fun of it.

“Every soldier and soldiers’ spouse is here, no matter where they’re buried. Even George Washington. He’s over there. The outcome of this fight will determine who wins this war once and for all. If we win, we will finally be a free and independent country with no further interference from any European power. If we lose, we go back to being a colonial outpost of the British Empire. Certain powers have decided that having our side win is of paramount importance. So, here we are.”

“Well, OK then. Let’s do this.” I looked over at Barker. “Go get everybody. We follow the ghosts in. Let’s go.”

As everybody, living and dead, formed up and headed down to the boats, Dad moved over to me. He reached out an arm and I fell into the bear hug.