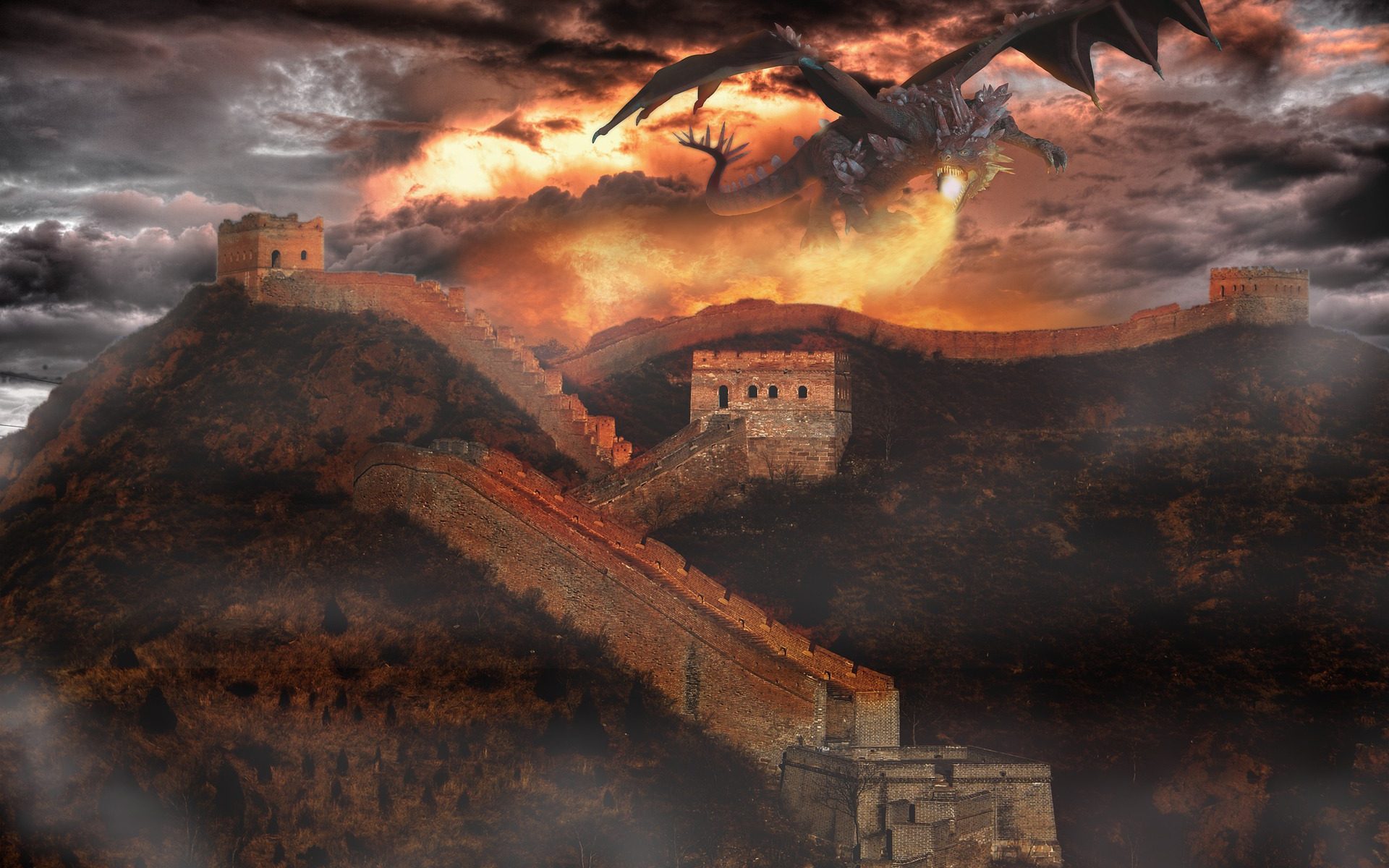 The Week 7 of the More Odds Than Ends prompt challenge brought me back to a prompt from late last year. I have always liked straight up swords and sorcery fantasy. You know, the kind that feels medieval but with real dragons and magic. These two prompts have joined together in my head and appear to be forming the basis of a short story at least. I will have to take some time and follow this thread to see where it leads.

In the meantime, Fiona Grey and I traded prompts. Her prompt to me was “My lady, there appears to be a dragon invasion underway.” She got Why did the cat send you a text? from me.

Signs of spring were finally starting to show. There were still piles of snow in shadowed corners of the keep, but small sprigs of green could be seen, here and there, poking through the dirt. Some of the trees had small buds on their branches. Lady Eirwen sighed and turned away from the window.

“Finally. Spring is coming. Perhaps now the elves will return to the mountains,” she remarked to her maid.

“I believe I will ride out today and inspect the pastures and fields. I need to be outside and an inspection ride will give me a good excuse. Please send someone to inform Balar,” Eirwen decided.

“Yes, milady. I will return shortly and assist milady with your riding habit,” Lowri curtsied and left the sitting room.

Eirwen turned back to the window and stared over the snow-covered fields and pastures dotted here and there with brown patches where dead grass was showing through the melting snow.

She began pulling her riding habit out of the wardrobe. In a decidedly unladylike manner she had had her habit specially constructed so that it split into two wide legs instead of the usual skirt. This allowed her to sit astride rather than having to ride side-saddle.

Lowri would fuss about Eirwen trying to get dressed by herself, but Eirwen did not like to sit still and do nothing while somebody else waited on her hand and foot.

The maid returned just as Eirwen was starting to step into the habit.

“Milady! Please! Let me do that!” Lowri did indeed fuss.

Eirwen bit her tongue this time and allowed Lowri to finish helping her with the riding habit.

“Thank you, Lowri. I should return in a few hours,” she said finally.

Walking through the halls, Eirwen was struck once again by the severe nature of the keep, even on the interior. This place had been built for war and although there had been no wars severe enough to test the walls in her lifetime, Eirwen always felt that the entire structure was still on watch.

This winter had been strange. Early snows and the elves leaving the mountains had left everyone feeling off-balance. The sunshine and longer days were a welcome change.

Eirwen reached the stables and found Balar and his assistant Davan waiting for her with her horse, Kestral. A second horse was saddled and held by Davan.

“Thank you, Balar. Who else is riding out?” Eirwen asked.

“If it pleases you milady, I would feel more comfortable if young Davan here rode out with you,” Balar said respectfully.

Eirwen looked at Balar. “Is that really necessary?”

“I’m not sure, milady. I just have a feeling,” Balar replied.

She eyed Balar. He had been the stablemaster her whole life. Her father had always told her that if there was one thing she could trust absolutely, it was Balar’s “feelings.”

Eirwen nodded. “Very well. I intend to ride out to the nearer pastures and the fields to the north of them.”

“That should be fine, milady,” Balar inclined his head slightly. He made a small hand gesture, and Davan mounted the other horse. Balar held Kestral’s head while Eirwen mounted.

The pasture and field inspection went smoothly. Eirwen was pleased to discover that Davan had answers to the few questions that did occur to her. For the most part she simply enjoyed the appearance of freedom the ride gave her. There would be plenty of responsibilities when she returned to the keep.

She completed her circuit of the last field and reluctantly turned back to the keep. She really did not want to go back inside those dark, slightly damp stone walls.

“Milady, someone is riding towards us,” Davan said from behind her.

Eirwen pulled her gaze from the still snow-covered mountains and turned toward the keep. She shaded her eyes with her hand and peered at the rider galloping toward them.

“Is that Balar?” She nudged Kestral into a trot.

“I think so, milady,” Davan answered. He pulled his horse alongside her.

“Balar?” she tried to keep her expression neutral as she looked at the stablemaster.

Balar took a deep breath. “My lady, there appears to be a dragon invasion underway.”

Davan gasped. Eirwen’s heart sped up and her eyes immediately returned to the mountains. The sky was clear.

She turned back to Balar. “Where?”

“To the east, milady. The messenger arrived a short time ago. I came to find you as soon as he told us.”

“How much time do we have?” Eirwen pushed Kestral into a canter and the two men followed.

“Four or five days before they move in this direction,” Balar answered.

“Very well. Clear the main courtyard. Start moving the farmers and villagers into the keep. Move as much of the livestock as possible into the back pens. It will be crowded, but we should be able to shelter most of them. Move the rest into the lower caves in the mountains,” Eirwen continued through the list of preparations she’d memorized as a young girl. Her father had wanted to ensure that she was ready for anything once she became the Lady of Scarwood Keep.

Eirwen kicked Kestral into a gallop. I wish you were here now, Father.

If you want a creative challenge you can submit a prompt at More Odds Than Ends, or you can choose for yourself and pick up one of the spares. The assigned challenge has been a great way to stretch my heretofore small creative muscles. I think they’re getting better! It’s a fun journey.

Image by enriquelopezgarre from Pixabay

One Reply to “Dragon Invasion”