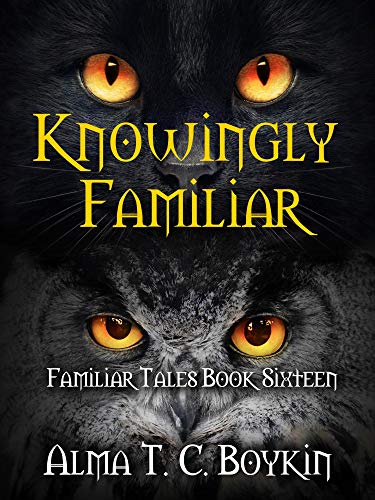 This week’s book review is Alma T.C. Boykin’s Knowingly Familiar. It is Book 16 in the Familiar Tales series. And, until this week, was the latest in that series of stories about the magical community in Riverton. I like to think that the Riverton of the familiars is the Riverton my grandparents lived in and I visited frequently as a small child. The weather and some of the town features are similar…hmmm….but, back to the book.

Return to the world of Familiars and goth shadow mages. André and Lelia Lestrang and their familiars, Rodney, the kit fox, and Tay, the ring-tailed lemur, are now dealing with teenagers, a daughter who loveslovesloves unicorns (especially pink and purple unicorns), and wants a house-dragon for a pet. The cherry on the cake of all that chaos is an ancient evil that arrives in Riverton via an archaeological exhibit at the university. Lelia and André are the lucky shadow mages who get to do the heavy lifting for this one. Oh, fun.

As is usual with her Familiar stories, Alma Boykin provides a good mix of mundane life and its ups and downs, magical encounters, and funny moments. Here’s the blurb for Knowingly Familiar:

Something moves. A Mesopotamian curse sends ripples through the magical community of Riverton. Mages André and Lelia Lestrang find themselves fighting ghosts from their past. The battle draws them closer to Master Saldovado and the clans, closer perhaps than Lelia’s heart dares to go. How long before Patrick Lee and Riverton’s other magic users demand answers about the clans? The Familiars are keeping the secret. For now.

We catch up with André and Lelia about 15 or so years after the event in Judiciously Familiar. The university archaeology department has received a shipment for an upcoming display, but something is off. One spell is broken and the evil within destroyed. But, now Lelia and Dolores have to explain to the dean why she cannot and should not allow the exhibit to proceed without a thorough magical cleansing of all the artifacts destined to go on display. As an academic administrator though, the dean cannot conceive of anything as silly as an ancient curse affecting the highly sought-after exhibit.

I enjoyed the glimpses of the mundane chores and family issues that Lelia and André have to deal with as well as the more dramatic magical encounters. Boykin’s description of the ins and outs of university politics is spot on as well. I’ve had deans like Dr. Tierney and I really wish I’d had Dolores and Isabeau to help deal with them.

The story’s action ebbs and flows and keeps the reader fully engaged. In fact, I read this installment in the series in one sitting. We get to see Lelia as a full adult now (whether she likes it or not) and her growth into her role as a shadow mage. She still hates that she and André have to deal with monsters from abyssal planes and the humans who opened the gates for those monsters, but she has finally recognized that understanding evil does not mean that she herself is evil. Her daughter’s unbridled love of all things cutesy and pastel-colored will be Lelia’s undoing well before any abyssal monster catches her. That, and the fact that Deborah clearly has Master Saldovado wrapped around her little finger.

If you haven’t read any of the Familiars books before, I recommend you start from the beginning and work your way through. You won’t regret it. There’s another reason to do that as quickly as you can…Learnedly Familiar was just released this week and you’ll want to get started on that one as soon as you can. You can read more of Boykin’s work on her blog, Cat Rotator’s Quarterly.