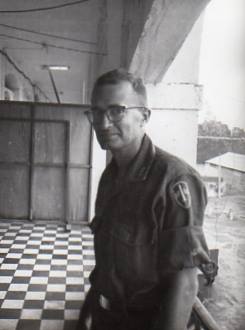 The essay below was written by my father for Veteran’s Day 2011. Dad passed away in 2013. I am the daughter, niece, granddaughter, and great-grandaughter of veterans of the Army, Air Force, Navy, and Coast Guard (sorry Marines, we missed that branch!).

I am a veteran of the Cold War and Vietnam. I served for thirteen years as an officer in the regular Army after graduating in 1956 from the ROTC at Johns Hopkins University. I am the son of a World War II veteran who in turn was the son of a veteran of World War I and the Spanish American War. In a fundamental way all three of us were typical citizen-soldiers just like millions of others who have served in the armed forces of the United States.

Beginning with the minutemen in 1776, and then through many years, these millions have drilled, stood watch and patrolled the land, the seas and the skies. They have fought in big wars and in deadly small engagements. This has all been shaped by the fact that the United States of America is a nation unique in history. Our founders well understood the historic importance of their new beginning. They carefully wrote out the principals that were to guide the new nation. Abraham Lincoln at Gettysburg illuminated these principals with a blazing light that reached the whole world. Our liberties, repeatedly won at such heavy cost, have drawn men and women from all over the earth who sought freedom for themselves and their children. Those trapped here in obscene slavery also understood the American ideal. They insisted on gaining their birthright and as Americans they would not be denied it. No one needed to explain to any of these people the exceptional nature of the United States of America and its promise for all. From everywhere, and from all conditions, millions came to build and defend this special nation.

The exceptional role of America in the world’s history is sometimes not well understood even by our best foreign friends. At times even some Americans have temporarily forgotten their historical destiny. A dark example from my time occurred during the Vietnam War when many insisted that it was proper that the Vietnamese people should be ground down by Communist oppression simply because their oppressors were also Vietnamese.

Freedom requires free men and women to defend it. During my service I had the privilege of teaching chemistry for several years at the United States Military Academy at West Point where the motto is; “Duty, Honor, Country.” The essence of this charge to the West Point cadets also guides all who have worn the uniforms of our country.

One night our small post was attacked in Vietnam. As we rushed to our fighting positions an exploding mortar shell threw fragments into the back of a corporal, a radio operator. He was knocked to the ground. Painfully wounded, he continued to crawl forward through the exploding steel and choking dust, yelling, “Keep firing! Keep firing!” Our position held that night. One third of our comrades were killed or wounded. We learn and learn again what our duty is from such Americans.

In a long life I am proud that at one time I was able to serve as one among the millions that have fought so that; “the government of the people, by the people and for the people shall not perish from the earth.”