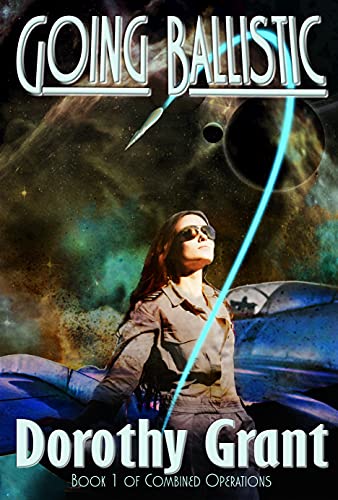 Michelle Lauden always wanted to be a pilot and go to space, but that didn’t happen. Piloting sub-orbital planes, known as ballistics, got her closer to space than most people. Then on a routine flight leg she, her plane, and her passengers became pawns in the life-threatening political games playing out between two planet-spanning governments.

What kind of pilot does it take to bring a plane in for a safe landing after it’s been shot at by one government and almost hijacked by another? Michelle is about to find out as she uses everything she’s ever learned or experienced to get her bird safely on the ground. Then she still has to avoid becoming a casualty of a cold war that’s rapidly going hot.

When her plane tries to come apart at apogee during a hijack, ballistic airline pilot Michelle Lauden handles the worst day she could imagine. When she gets down safely without losing any passengers or crew, though, she finds her troubles have just begun!

The ground below is as unsafe as the air above. The country she’s landed in has just declared independence from the Federation. The Feds intended her passengers to be the first casualties in the impending war – and they’re not happy she’s survived to contradict their official narrative in the news.

The local government wants to find her to give her a medal. The Feds are hunting her to give her an unmarked grave. As they both close in, Michelle’s running out of options and time. The only people able to protect her, and hide her tracks, are an accident investigation team on loan from the Federation’s enemies… the same enemies who sent her hijackers in the first place. And they have their own plans for her, and the country she’s in!

Being a pawn in political games is obviously never fun and Michelle has to quickly figure out who, if anybody, is on her side, and where she might be safe. She concocts a plan to hide herself among pilots who fly cargo around the continent. She will have to give up her career and her dreams of heading off-planet, but at least she’ll be free and alive – if she has the time to carry out her plans.

The characters in Going Ballistic are fully realized and authentic. We feel Michelle’s worry and stress as she goes into the crash investigation board meeting, and her relief when she’s offered a modicum of hope by perfect strangers who seem to understand exactly what’s at stake for her. It’s already clear that she is going to be used as either a scapegoat, or turned into a victim – likely a tragically dead victim – for her part in safely landing a badly damaged plane and saving the lives of her passengers and crew.

Some readers might feel that a government shooting down a plane in order to create a crisis is taking the willing suspension of disbelief a bit too far. To those readers I say that idea is a bit too close to home for me. There are numerous examples in history of governments deliberately causing mayhem, destruction, and loss of life among their own citizens in order to provide an excuse to implement some new policy or emergency orders, or even change in governmental structure. Grant has taken those examples and used one that has occurred in real life and given us a story of how the outcome might be different if enough players work to change the government-approved version of the story.

An experienced pilot, Grant brings a wealth of knowledge and detail to Michelle’s experiences in the cockpit of different types of aircraft. There’s enough information for the average non-pilot to figure out what’s going on, but the writing never drifts too far into insider jargon. Instead you get just enough detailed information to realize how damn complicated it can be to fly an airplane, and that despite that, it might be fun to learn how to fly. And I’m prone to airsickness so that’s saying something!

Dorothy Grant has given readers an action-packed political thriller, added in some military-science fiction (mil-sf), some great flying, and topped it all off with a touch of romance. The characters are fully realized, and the political games unfold as you move through the story. The political geek in me thoroughly enjoyed it all. Going Ballistic is a fast read with well-paced action, a good amount of humor, and realistic characters and settings. Go get it and read it!